September On Line Only Coins 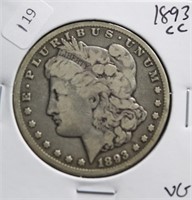 Lots will start ending on Sunday, September 15 at 7:00pm EDT - soft close - Lots may remain open as others close around it.  There has to be 2 minutes of inactivity on the lot before it will close.  As long as bidding continues, the time will extend and the lot will remain open.
850 Lots of Some of the Best Coins we have ever offered!!! 10+ Gold Coins - Graded and Ungraded 1897 Barber Half Dollar - NGC Graded PF65 Cameo - ONLY 731 EVER MINTED!!! 1907 Barber Quarter - ANACS Graded PF62 Cameo 1900 LaFayette Silver Dollar - PCGS MS64 1936 Deleware Half Dollar - PCGS MS64 1937-S Arkansas Half Dollar - PCGS MS65 1937-D Boone Half Dollar - PCGS MS67 1924 Huguenot Half Dollar - NGC MS66 1938-D Texas Half Dollar - NGC MS67 1936 Long Island Half Dollar - NGC MS66 In addition to these Great Coins, we also have: Carson City and other Morgan Silver Dollars, Peace Dollars - including RARE date 1928,  Complete Book of Franklin Half Dollars, Complete Set of Kennedy Half Dollars, U.S. Silver Proof Sets 1958 - 1964 inclusive - all in the same holder, 1961 - 1964 Silver Proof Sets - all in the same holder, 26 Sterling Silver 1 oz. Rounds of 26 Different U.S. States, 27 Sterling Silver 1 oz. Rounds of First Day Issues,  Some of the prettiest Lincoln Cents we have ever had, Silver Certificates, Red Seal Currency, Prestige Sets, Mint Sets, UNC Sets, Silver Proof Sets, Silver Eagles, Walking Liberty Half Dollars, Framed Coin Sets, Coin Books, Silver Rounds, Tokens, Commemorative Boxed Sets and Lots, Lots More!!! We also have a nice selection of Sports Memorabilia, from Jersey's to Baseballs and Football to Sports Cards and Autographed Photo's of some of your favorite players from years past!!! Don't miss out on this auction!!  Too many great, hard to find coins in this one!!! As always, if you have coins you would like to auction, give us a call or send us an email, we would love to speak with you!!  We can sell 1 coin or an entire collection or estate!!  dave@powellauction.com or 865-938-3403
Bidding Notice: WE SUGGEST YOU PLACE YOUR MAXIMUM BID AND LET COMPUTER BID FOR YOU, DUE TO INTERNET LAGS. WE ARE NOT RESPONSIBLE FOR ANY COMPUTER MALFUNCTIONS. ALL TIE BIDS GO TO FLOOR.
Location
KNOXVILLE, TN
Details
Auction Details
Catalog
View Catalog (850 Lots)
Single Page

No bids found for this item

In the case of a tie bid, precedence is given to the earliest bid

Your Max Your Bid

Your Max Your Bid

Your Max Your Bid
Click to add notes.
Notes saved

Email Privacy Policy We have created this email privacy policy to demonstrate our firm commitment to your privacy and the protection of your information. Why did you receive an email from us? If you received a mailing from us, (a) your email address is either listed with us as someone who has expressly shared this address for the purpose of receiving information in the future ("opt-in"), or (b) you have registered or purchased or otherwise have an existing relationship with us. We respect your time and attention by controlling the frequency of our mailings. How we protect your privacy We use security measures to protect against the loss, misuse and alteration of data used by our system. Sharing and Usage We will never share, sell, or rent individual personal information with anyone without your advance permission or unless ordered by a court of law. Information submitted to us is only available to employees managing this information for purposes of contacting you or sending you emails based on your request for information and to contracted service providers for purposes of providing services relating to our communications with you.

The email address {0} has been subscribed to the email list.

Oops, there was a problem.

I was unable to add your email address to the email list. Please check your address and try again.

Oops, there was a problem.